Last night I was observing and taking pictures of the jewel of the winter skies M 42 or the Orion Nebula. I took many pictures of this nebula at full 3910 focal length of my telescope.  I will process this close up later. I then found M 74 or the “Phantom Galaxy” in the constellation Pisces.  It is approximately 32 million light-years from earth.  The picture below is the galaxy. 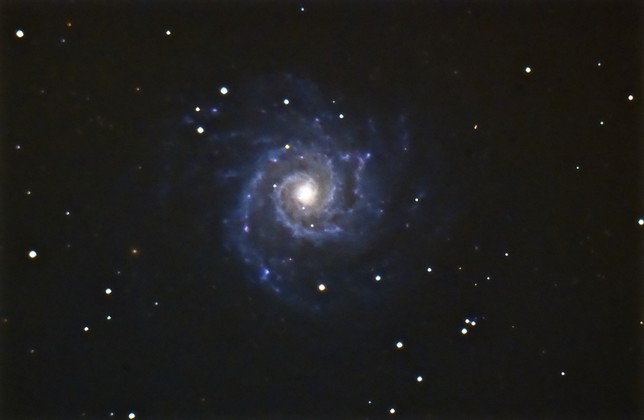 My target for the night was the Sculptor Galaxy located in the Sculptor Constellation in the low southern sky.  I have taken a picture of this galaxy before, but this time I used the full power of my 14-inch scope at 3910 mm focal length.  This allows for a magnified image, but is difficult to focus and requires longer exposure times.  I like the way this image turned out.  I shot it with my Nikon D800A camera and was auto guided.  The exposure time was 2 minutes at ISO 3200.  Fifteen images were stacked using ImagesPlus 6.5. The picture is shown below. 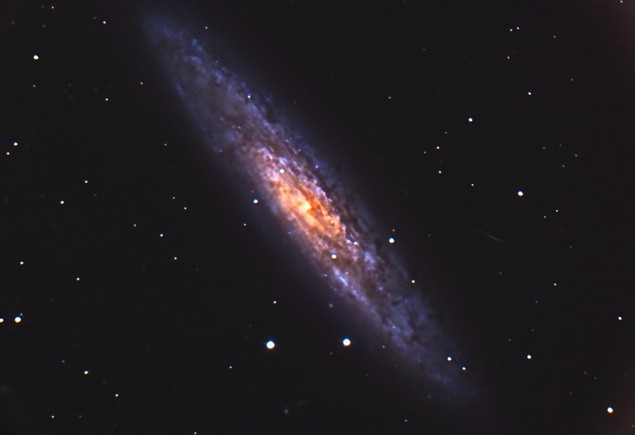 I installed a new weather station at the Dry Creek View Observatory.  To access this station, I have placed a button at the bottom of each page titled. "Observatory Weather".  This will take you to another web page with the data displayed from the Dry Creek View weather station.  It takes a few seconds for the data to be displayed on the new page.

Merry Christmas to all.  I did get a chance to take a picture of the Conjunction of Jupiter and Saturn.  I was able to get the picture with my 2X Barlow lens attached to my Camera and Scope.  I took the picture on December 21, at around 6:00 PM MST.  I like the way this picture turned out. Saturn is a little dark, and Jupiter is a little bright, but that is how it was. I used my Nikon D 810A in movie mode and shot the movie for about 90 seconds.  I stacked the movie frames using ImagesPlus and processed the picture using Adobe CS2 and Nikon NX2 Software.  The moons of Jupiter are (top Left to Bottom Right)  Callisto, IO, and Europa.  The moon Ganymede is in front off Jupiter. The picture is shown below. 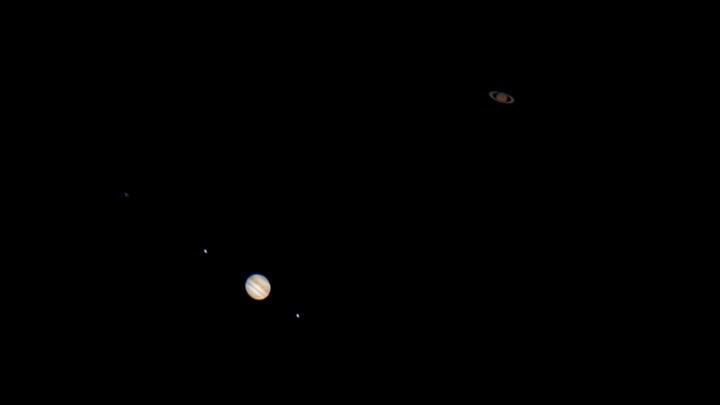 The California Nebula (NGC 1499) is an emission nebula in the constellation Perseus.  I processed the picture below of the California Nebula by using two different post processing programs.  I took 38 light frames and opened them in the program ImagesPlus 6.5.  I auto stretched (brightened up the Nebula) of each of the 38 photos.  Then I "Normalized, Aligned, and Stacked" each of the photos.  I then opened the stacked image and did more post processing with the program Nikon NX2. I set my Nikon 810A camera to DX mode with a 30 second shutter and 1600 ISO for each of the light frames. My 14-inch Celestron scope had the HyperStar Lens attached giving a focal ratio of f/2.  The final processed photo is shown below.  The image is also in my gallery where it can be enlarged. 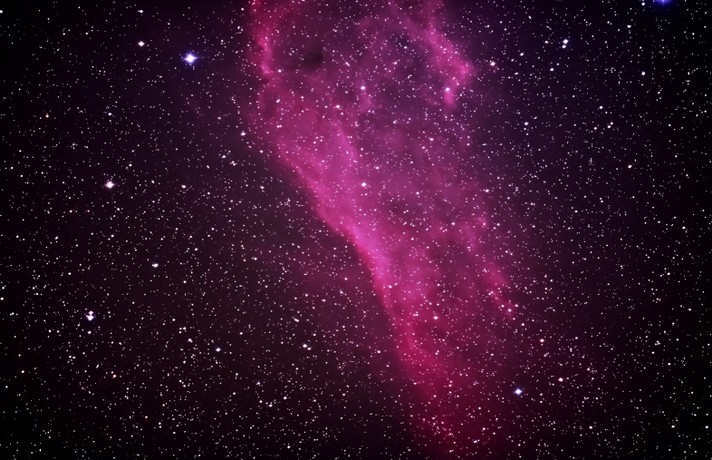 I actually took this picture the same night I took the picture of the Horsehead Nebula.  It was an after thought and I only took 6 light frames.  Due to the clear night, I like the way this picture turned out.  The focus was good and very little post processing was needed.  During stacking of the light frames I used 6 flat frames to normalize the edges of the picture so the corners are not so dark.  The picture is below and is also in my gallery. 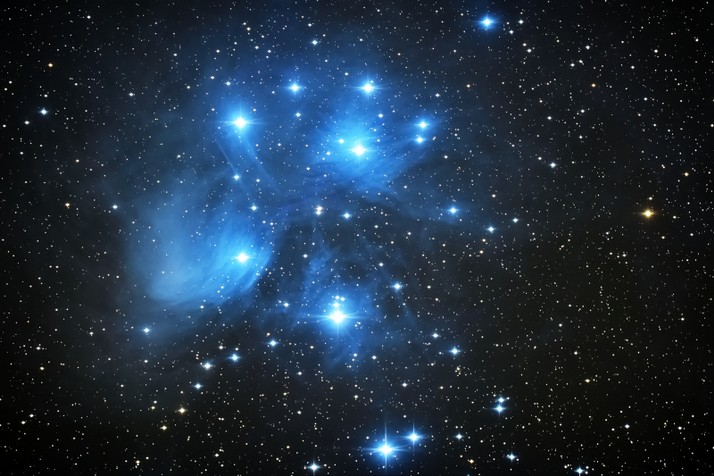 I have taken photographs of the Flame and Horsehead nebula in the constallation Orion, but tonight, I focused just on the Horsehead.  I took 34 light frame pictures and stacked and post processed using ImagesPlus software.  I finished the processing using Nikon Capture NX2 so that I could crop and frame the picture.  The resultant photograph is shown below and also shown in my gallery. 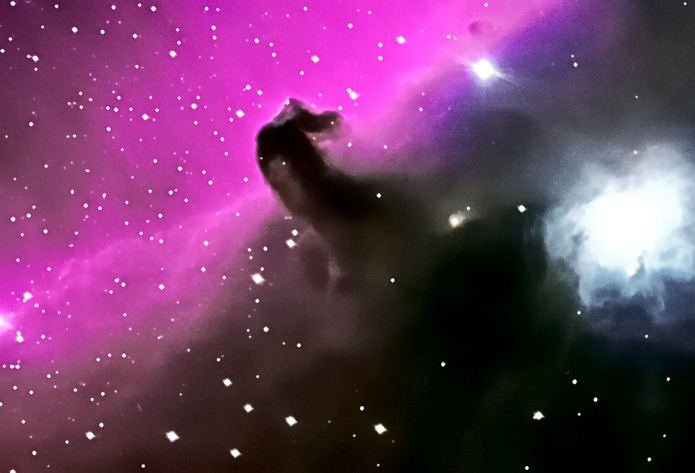 Tonight, my target of interest was the Veil Nebula in the constellation Cygnus.  Before I took this picture, I used my Nighttime Imaging 'N' Astronomy (NINA) software to get a good focus on the object.  This software worked well, but it took a long time to completely sharpen the stars as I was not even close to sharp focus to begin with. To achieve a low HFR (Half Fulx Radius) when focusing with NINA, my HFR started out at 7.5 and got as low as 3.2 when it was finished.  The lower HFR number the better, but it took nearly 1 hour to achieve the 3.2 number.  My suggestion is to get as sharp of focus as you can then begin the Nina Autofocus routine.  See my post on August 22, to see what equipment is needed for autofocusing.
My picture of the Veil Nebula is below.  This nebula is hidden in a Sea of Stars.

As stated in my post of September 20, I couldn't get a good picture of the planets.  After a month the skies cleared on October 11, so that I could get a picture of Mars in "Opposition".  The picture is shown below. 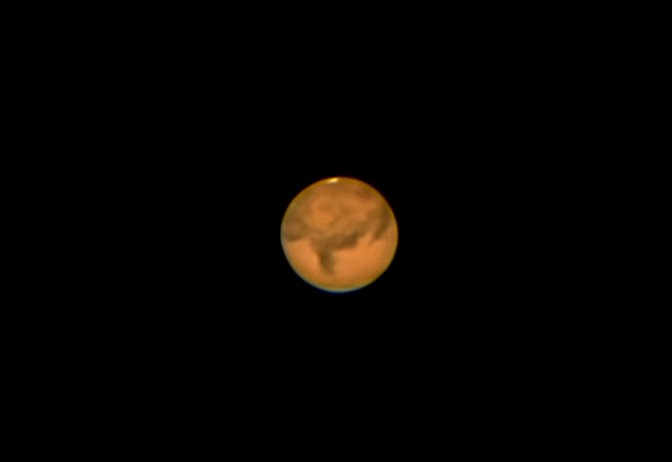 To get the picture of Mars, I used my 4x Televue Barlow lens with my Nikon D810A camera.  When taking pictures of planets, you must use video instead of a single shot.  This is because of the oscillation of the planet due to the earth's atmosphere.  That is why I couldn't get a good picture with the hazy smoky skies.  I took a 3-minute video at a resolution of 1920 x 1080 and 60 frames per second.  This gave me about 11,000 frames to choose from to get the best focused image.  In order to get the best images of over 11,000 frames, I used the program "ImagesPlus".  This program analyzes the individual frames then I selected the best 5% of those frames to have the program "Stack" and "Align".  The result is what you see above.  I have also placed this picture in my Gallery.

With all of the smoke in the skies from the fires in California, I can't get a good focus on the planets of Mars, Jupiter and Saturn.  Yes, those fires are affecting the "seeing" here in Utah.  However, with the dark skies, I can get pictures of some deep sky objects.  Last night I had to try and get some Astrophotos even though the skies were hazy.  It was hazy, but dark.  I guess one out of two atmospheric conditions isn't bad.  My target was M 33 the Triangulum Galaxy.  Below is my photo. 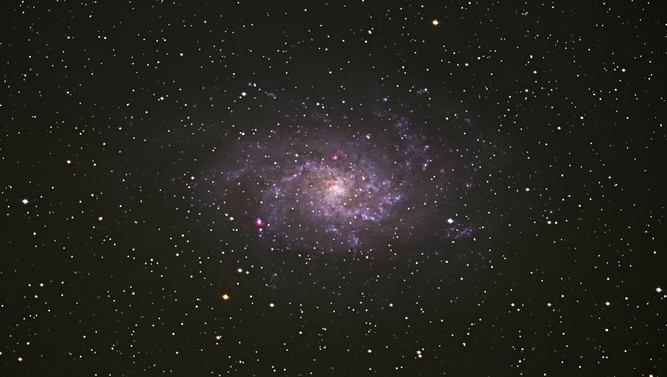 Today, I did some cleanup of the web page.  I realized I had put the blog dates from oldest to newest posts.  I changed that to the reverse order so that the newest posts are at the top.
During the past few weeks, I have been imaging the planets Saturn and Jupiter.  For those out there who are having trouble getting a clear focus on these planets either for viewing or photo taking, take heart, it is not your equipment.  Even though I am located in central Utah, the wild fires in California are causing "Seeing or Clarity" problems in the atmosphere.  The planets look like they are boiling or pulsating.  This makes clearly focusing nearly impossible.  Hopefully the skys will clear and I will be able to take some "clearly focused" pictures.

Yesterday, I had a lot of fun in the observatory.  A few years ago, I purchased a "Micro-Touch" wireless focuser from Starizona. This has been handy as I can manually focus the scope from the warm room by using "Live View" from my camera.  I finally looked into the "Focus Max" software that came with the Micro-Touch.  The software was easy to install, but I found out that I needed additional software from MaximDL at a cost of $499 to run my camera with the focuser.  That was not acceptable to me so the search began to find a program that works with the Micro-Touch focuser and will interface with my Nikon D810A.  I found such a program called NINA (Nighttime Imaging "N" Astronomy) which can be downloaded at https://nighttime-imaging.eu/. This software interfaced well with my Camera and the Micro-Touch focuser.  I was actually able to autofocus my image in very poor seeing conditions and at full 3010 mm focal length of my Telescope. That setup is the most difficult for astrophotography with my equipment. Best of all it was free.  Below is a picture I took after the autofocus was complete.  It is the Swan Nebula M 17. 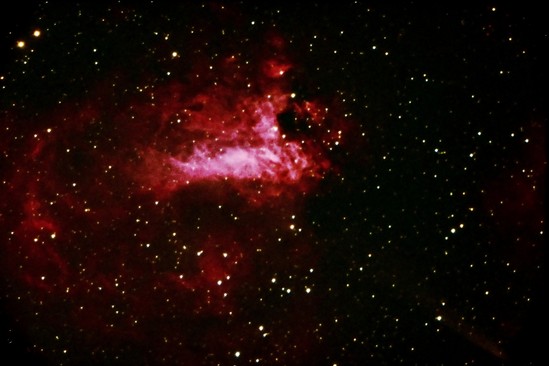 Last night I took the time to do some astrophotography.  My target was M 101 the “Pinwheel” galaxy.  I had my scope set up at f/11 3900mm focal length with my CGE 1400 Telescope.  I was not happy with the image that I captured.  At an ISO of 3200, and 6 pictures stacked, the image was too grainy for me and a little out of focus.  Below is the processed image.  I will try another night to get a sharper less grainy image. 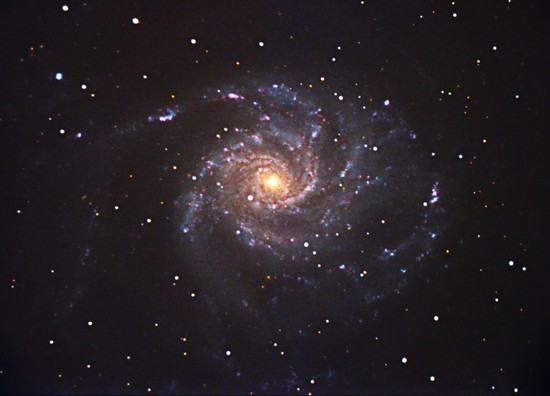 For the past 3 weeks, I have been "Re-Developing" the Dry Creek View Observatory Web Page.  I moved from an old web builder which I have been using for the past 8 years to a new developing software called "WebSite X5 evo.  My old web blogs over the years will be archived by me and used as a personal history of my astronomy activities.  These older blogs will no longer be available on my web page.  Therefore, I am starting new with this July 31, 2020 entry.
I will be following a similar format to the old web page, but new and I hope better pictures will be forthcoming.  I will be posting higher resolution photos so they can be better seen when zooming in for detail.
As I am now retired from my day job, I hope to be doing much more star gazing and astrophotography.  My home page will indicate when my pages are updated under the heading "Most Recent Updates".  Check back soon as I plan on taking some classic pictures of the sky at higher resolution.  Clear Skies, Travis Smith